I Still Love Her

“I Still Love Her” is a video podcast featuring veteran multi-media personality, TT Torrez and hip hop driven guest hosts, coming together to discuss hip-hop culture. Women of the culture deserve to have a place to have unfiltered girl talk about all things happening. Each episode, TT and her expert guest hosts, sit down for a fun-filled conversation on what’s happening in the world of hip-hop. “I Still Love Her” cultivates a voice for women to speak their minds. Tune in to hear what’s next on the Hip Hop Scene! With Hip Hop culture being dominated by men — women in Hip Hop deal with unrealistic expectations from fans as well as other artists. In recent weeks, Halle Berry went viral for crowning Cardi B as the Queen of Hip Hop at the premiere of her new Netflix film Bruised. However, many hip hop fans criticized Barry’s statement. This week, TT Torrez is joined by guest hosts, Melissa G and Tai Marie to discuss the usage of the word “Queen” in Hip Hop and how fans react to it. Is there a Queen of Hip Hop? Or can there be more than one queen? Find out on this week’s episode of “I Still Love Her.” Do people overshare their personal lives on the internet? Many celebrities and artists share their lives with fans through social media. However, this instant connection isn’t always beneficial to A-listers. For instance, the release of a now viral video of R&B Hip Hop Singer, Faith Evans is being accused of cheating by her husband Stevie J after the announcement of their divorce. In this week’s episode, TT Torrez is joined by guest host, Tai Marie to discuss how airing out details of romantic relationships can lead to public humiliation. Can oversharing on social media hurt a person’s character? Find out more on this week’s episode. The Toll of Death In Hip Hop

Hip Hop Culture has become a war zone. Within the last few years, there have been many deaths of rappers in the Hip Hop industry. From Nipsey Hustle to Pop Smoke to the recent murder of rapper Young Dolph, many Hip Hop artist’s deaths have been the result of senseless gun violence. TT Torrez and guest host, Melissa G speak about the effect death has on Hip Hop culture and how the Hip Hop industry can spread awareness of gun violence. Will death culture in Hip Hop subside? Or will Hip Hop be kept in mourning? Do women in the culture get more scrutiny when voicing their opinions on the new sound of Hip Hop? Or has the new sound of Hip Hop opened the door to open drug use? Recently, Cardi B went viral speaking about the use of drugs in the Hip Hop community and how it causes a depressing experience for listeners. This week, TT Torrez is joined by Melissa G. to discuss the evolution of Hip Hop music and the bias towards women in the culture that make music to “turn up” the club experience. Do women of the culture get held to an even higher standard when they're in relationships? Or is the standard for all women set ridiculously high? Last week, social media was in a frenzy when actress and talk show host Jada Pinkett Smith had an open conversation about her life in the bedroom with her husband of 26 years, legendary actor Will Smith. Social media and some celebrities bashed Pinkett Smith for her openness, claiming she's constantly "embarrassing" her marriage. This week, TT Torrez is joined by Melissa G. to discuss the standard of relationships and sexual accountability for women. Could the bar be higher for women who work within the entertainment industry? Find out on this week's episode. Has to cancel culture" gone too far even though it gives a voice to women? To "cancel" someone (usually a celebrity or other well-known figure) means to stop providing support to that person. In today's world, if you've done or said anything offensive about another group, person, or belief, you can be immediately "canceled." Is cancel culture healthy for the culture? Should hip-hop be sensitized? Does cancel culture work? And why aren't some people held accountable while others are crucified? In this episode of the "I Still Love Her" podcast, our hosts TT Torrez and Ivy Rivera are joined by Melissa G. to discuss "cancel culture's" impact on the music industry.

The conversation around Black and Hispanic women's bodies has significantly escalated, especially in the world of social media. Women are constantly ridiculed for what they wear, how they choose to display their bodies, and whether or not they should keep their natural bodies or choose surgical enhancements. On October 1st, 2021, rapper Meek Mill released his fifth studio album. The album placed at No. 3 on the Billboard Top 100 charts. However, Meek has received a ton of backlash because of the album's cover art, which displays naked black women. Many are outraged about the album cover, even though a black woman created it. Artists like Lizzo, City Girls, Sukihana, and many others have been ridiculed and judged for the choices they've made regarding their own bodies. In this episode of I Still Love Her, TT Torrez and Ivy Rivera will dive into a conversation about society's judgment of women's bodies, how it affects women, and what it has done to the culture. 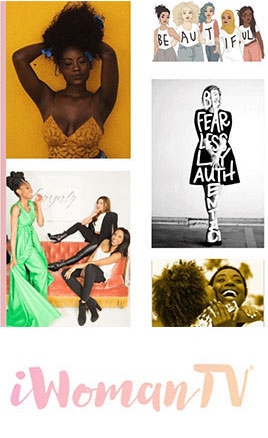 iWoman TV is more than just a platform: It’s a movement to give women & girls their power back. We promote female content creators, positive stories and news programing which informs our female audience

We will be in touch!

Thank you for joining the iWOMAN Village. We will be contacting you soon.

We will be in touch!

Thank you for joining the iWOMAN Village. Already, subscribed with this email id.